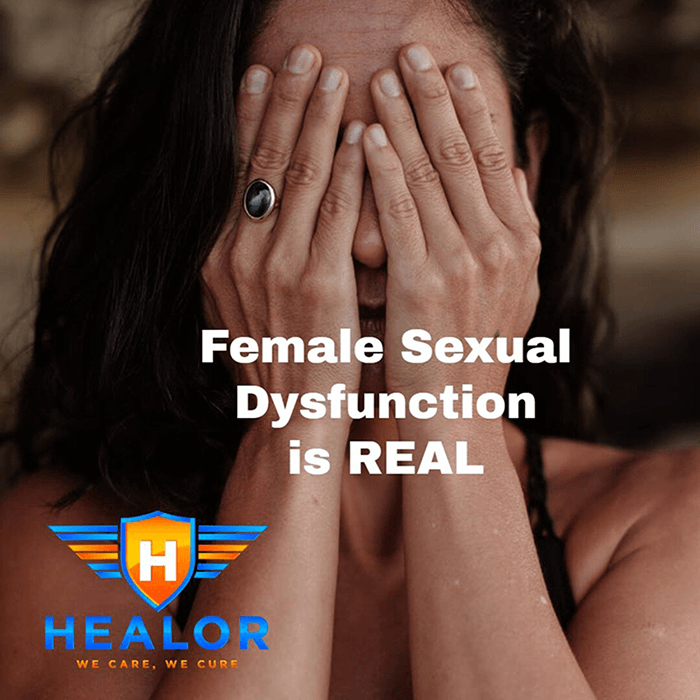 Only 43% of women with sexual dysfunction report this issue, making it a really common problem that often goes ignored. People may be hesitant or embarrassed to discuss this issue, but it is important to remember that it is treatable. Sharing your concerns can make your sexual life much healthier.

Ø Physical causes can include different medical conditions. You may be facing problems due to heart disease, diabetes, hormonal imbalances, neurological diseases, menopause, chronic diseases like liver failure, and drug or alcohol abuse. Certain medications can also have side effects that affect sexual function and desire.

There are some common problems that women may face due to female sexual dysfunction. These can include:

· Inhibited Sexual Desire can result in a lack of interest or desire to have sex. It can be attributed to hormonal changes, medical conditions, medication, pregnancy, depression, fatigue, and stress. Boring, regular sexual routines can also lead to low enthusiasm for sex, as well as exhausting lifestyle factors such as caring for children.

· Inability to Become Aroused can be due to insufficient vaginal lubrication due to inadequate stimulation. The blood flow can also affect the clitoris and vagina in some cases.

· Anorgasmia is the inability to achieve an orgasm that women often face. It can be caused by sexual inhibition, lack of knowledge, inexperience, and insufficient stimulation. Certain medication and chronic diseases can also prevent sexual climax. Psychological factors such as guilt, feelings of sin or shame, anxiety, and past sexual trauma or abuse can also negatively affect orgasms.

· Painful Intercourse can be caused by poor lubrication, pelvic mass, ovarian cysts, endometriosis, vaginitis, sexually transmitted diseases, or the presence of scar tissue from surgery. Many of these diseases are not in the common knowledge of women and often go undiagnosed even after many checkups due to bias in medicine. The fear that women may have about the pain of intercourse or past sexual trauma can also cause sexual problems. This issue is relatively unknown to people and can go untreated.

Female sexual dysfunction diagnosis is a complicated process. A woman’s pain is often undermined and goes undiagnosed due to bias in medicine. Women need to make sure that their doctor takes a thorough physical examination, evaluation of symptoms, and medical history. Pelvic exams to check the health of reproductive organs and a Pap smear may be needed as well.

To diagnose psychological causes, it can be important to address fear, anxiety, relationship problems, drug or alcohol use, and past sexual trauma or abuse.

Unlike male sexual dysfunction, there is no Viagra pill that women can take to cure female sexual dysfunction. The best approach possible is to treat the condition through the combined efforts of the patient, their doctors, and trained therapists. Treatment strategies can include the following:

Is There a Cure for Female Sexual Dysfunction?

Treatment for female sexual dysfunction can be successful, depending on the underlying cause of the problems. If sexual dysfunction is caused by a reversible or treatable condition, the outlook for positive results is good. Even mild dysfunction due to anxiety, stress, or fear can be treated with improved communication between partners, education, and counseling. However, treatment for bigger underlying issues is harder due to a lack of research and possible treatment strategies.

Hormones can affect sexual function and desire in women. Many women may experience changes in sexual function as they age as a decrease in the female hormone of estrogen occurs due to menopause and aging. Aging can also decrease genital sensation and vaginal lubrication. Low levels of testosterone can also cause a decline in genital excitement, orgasm, and sexual arousal over time. Research on the effects of medication and hormones is still being conducted to treat sexual problems in women.

Changes in sexual function can occur after a hysterectomy (removal of the uterus), which includes the loss of desire, genital sensation, and decreased vaginal lubrication. This problem may be caused by the hormonal changes that occur after such a procedure. Blood vessels or nerves can also become damaged, affecting sexual function.

The loss of estrogen during menopause can lead to changes in sexual function. Emotional changes may also cause inhibited sexual desires. Vaginal lubricants or Hormone Replacement Therapy (HRT) can improve such conditions.

Some postmenopausal women may also experience increased sexual satisfaction. They may stop taking birth control pills that were affecting their sexual desires. They may even have decreased anxiety with regards to becoming pregnant. Fewer child-rearing responsibilities can also allow them to enjoy intimacy and relax with partners.

It is important to seek help if you face female sexual dysfunction. There is also a need to conduct more research into female anatomy and female sexual issues to help women in a better way.

When Will You See Results After Hormone Replacement Therapy?

How Effective is PRP Therapy for Erectile Dysfunction?

What Does the hCG Diet for Medical Weight Loss Include?